In 2011,  GirlGuiding Scotland set up The Big Name Hunt.  This was a year long project for girls to find memorials to women in their area, research them, and post them onto a website.  At the end of the year, the website was taken over by Glasgow Women’s Library in conjunction with Women’s History Scotland, with the continued support of GirlGuiding Scotland.

The website – Mapping Memorials to Women ( http://womenofscotland.org.uk )  – has gone from strength to strength. Over five hundred memorials have been mapped to date, with new additions appearing regularly.

In February 2013, at the request of Aberdeen Women’s Alliance, Glasgow Women’s Library held an outreach meeting in Aberdeen’s Central Library to encourage more people to add to the site. All those present were enthusiastic, but the Women’s Alliance noticed that few memorials had been added as a result of the workshop.  They contacted the attendees and discovered a lack of confidence about researching memorials and the women they commemorate. As a result, a series of events was organised, introducing women to the City Council archives, Aberdeen University archives and the local studies section of Central Library. For many of those attending, this was their first visit to e.g. the University library, or the first time they had met an archivist.

From this evolved the idea of presenting research to the public in the form of a Trail.  Glasgow Women’s Library, which has produced several Women’s Trails, gave invaluable advice. Aberdeen City Council provided funding.

The first difficulty soon became apparent – Aberdeen had produced far more interesting women than could be included in a single Trail!  The decision was made to concentrate on a small area in central Aberdeen.  Other issues, such as access to toilets and accessibility for wheelchair users, had to be addressed.   A route was chosen, starting and finishing at the Town House.  The route included the historic Castlegate area. 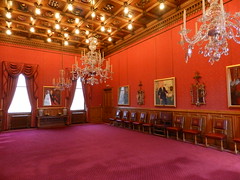 Trail leaflets were produced and distributed round libraries and other public buildings.

After several practice walks, to finalise timings, the Trail was launched on International Women’s Day, 8th March 2014. For the first walk, costumes were hired and the volunteer Guides wore a variety of outfits. Since then, some of the volunteers have created their own costumes, which may be worn if requested.

The group led walks through the summer, with appreciative audiences. The walks were free of charge, but tickets had to be booked through Eventbrite, in order to ensure that numbers remained manageable.  Health and Safety was always paramount.  An arrangement was made with  Shopmobility Aberdeen,  to provide wheelchairs and other mobility aids, if requested in advance.

The Trail has twelve stops.  As more than one woman is connected to some stops, twenty one women are included.  These women’s lives span over four hundred years, although the majority died in the twentieth century.  Within the Trail it became apparent that there were themes, such as health and civic life.  At the site of the former Children’s Hospital (stop Four) four women are commemorated:  Clementina Esslemont who founded the Aberdeen Mother and Child Welfare Association in 1909, Fenella Paton who founded the first birth control clinic in Aberdeen in 1926,  Dr Agnes Thompson who pioneered services to children and Dr Mary Esslemont (Clementina’s daughter)  who worked, inter alia, as a gynaecologist at the hospital.  Pioneering speech therapist Catherine Hollingsworth’s story is told at stop Six.  At the site of the former General Dispensary (stop Eleven), Maggie Myles, author of  a Textbook for Midwives, which has been in print continuously since 1953, is commemorated.

Civic life (stops One, Five and Twelve) includes two C17th benefactors, Lady Rothiemay and Lady Drum, who founded a school for girls, and a home for “aged virgins” respectively, Hilda Wernham, pioneered “wet” shelters for homeless people who were unable to access night shelters if they presented themselves while drunk.  Isabella Fyvie Mayo (the first woman to hold an elected post in Aberdeen), Isabella Burgess( Aberdeen’s first female councillor) Margaret Farquhar (First female Lord Provost) and Margaret Smith (first female leader of the Council). The last two women are still alive and both attended the launch of the Trail.

Dancing with the Devil

Other stops include the site where witches were accused of dancing with the devil in the late C16th,  as a result of which Janet Wishart was burned in 1597, and other witches were strangled then burned (stop Three).  The spot at which the last woman to be publicly hanged in Aberdeen, Katherine Humphry, met her end in 1830 is stop Two.   The site of the now-demolished hotel where the Female Chartists met between 1839 and 1841 is stop Eight.

However, we realised that the majority of the women on the trail had one thing in common – they recognised a problem, and they worked to solve it.  In every case, solving the problem was more important than their own self-aggrandisement, which may partially explain why most of these women have been forgotten.

Some of those going on the walks were able to add to our knowledge of the women, for example we were delighted to have Dr Agnes Thompson’s niece on one walk. Several women recollected Annie Inglis children’s classes, and some older walkers recollected Miss Moffat and Miss Walker, who founded the St Catherine’s Club (stop Seven). Many women were familiar with Myles Textbook for Midwives, but had no idea the author had been born and brought up in Aberdeen.

Most of those involved in the creation of the Trail had no previous experience of, or involvement in, Women’s History.  Instead, the project grew organically from the initial outreach workshop by Glasgow Women’s Library.  Future projects are now planned, to further develop Women’s History at grassroots level in Aberdeen.

Alison McCall is a member of WHS (originally Scottish Women’s History Network), attending her first conference, Gender, Families and Relationships in Scotland in November 2002.  Her major academic interest is in women with careers in Victorian Scotland.  Most of the women she has studied have been teachers, a profession replete with a plentiful and rich variety of original source material. She also has an historical interest in nurses, clerks, journalists and translators. A side interest is in the life and work of poet and translator Elizabeth (Bessie) Craigmyle (1863-1933), a trained teacher and probably Scotland’s best Victorian lesbian poet. Please get in touch if you’d like to read some of her poems.

In The Morning
Love, I am here.
Wild words passed yesterday ‘twixt me and you,
My careless hands wrought the deep wrong I rue,
You swore I should repent it.  Was it true?
Close, come more near.
Shuddering and white?
Why?  Let your lips press close and warm to mine.
Ah, sweetheart! has my beauty lost its shine?
Was not this woman pledged for ever thine
Who died last night?
So.  Turn away.
We did not think to meet again like this.
A lover’s quarrel should end in after-bliss:
Last night our lips were hungering for a kiss,
Give it today!
Eizabeth (Bessie) Craigmyle