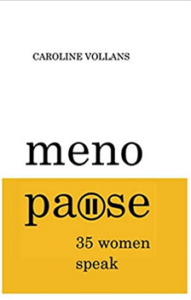 Menopause, a key aspect of most women’s lives, is no longer off limits. Much is written about it, increasing airtime on radio and TV is allocated to it, websites are dedicated to it, and support groups are burgeoning. As October 18 marks World Menopause Day, it could be tempting to interpret that the job is done.

The women in Menopause: 35 Women Speak, however, have something different to say:   menopause is far from being a taboo topic.

During my initial research where I simply chatted to friends and associates about my thoughts about a book of menopause stories, it was striking and motivating to see what a good idea they thought it was. If they didn’t feel they wanted to patriciate themselves, they usually knew someone who might be interested. Word got around – one woman led to another, led to their friend, led to a friend of a friend, led to a work colleague, led to a colleague overseas, led to a neighbour, and on it went – this is something that seems to happen among women. I also joined women attending community Menopause Support groups, GP-run groups and Menopause Cafes. This enabled Menopause: 35 Women Speak to capture the experiences of women from a range of backgrounds, including LGBTQI+ women, working class women, and women from Black, Asian, and minority ethnic communities.

Amid the multiplicity of voices there was one resounding message: there is still a certain silence about the subject. Notwithstanding the newfound exposure it gets in everyday life, people still don’t actually talk about the day to day realities of the menopause. The contributors in this volume, however, are keen to see this change. Their frank and courageous stories are documented, culminating in an enlightening tapestry of the spoken word, the written word and artwork.

Whilst there are some common aspects to some of the women’s lives during this process, a salient feature is the sheer diversity of their experiences. We meet Karen who feels at the prime of her life; Huma who lives miserably with her symptoms. Marcelle who advocates curiosity among women and men: Iman who just wants it over with. Lara who longs for her periods to end; Julie who thinks she will miss them. Ginny who enjoys her new found ‘invisibility’; Jayne who rages against it. As the collection shows, there is no such thing as an archetypal woman, and there  is no such thing as an archetypal menopause.

Some women speak about the cultural context (or lack of one) for speaking about the menopause. Maarya, who is of Indian heritage, has never heard anyone talk about the menopause in her culture. Julie who is of Bengali heritage, isn’t sure if there is a word in Bengali for menopause. Iman who is from East Africa, can’t think of anyone who talks about it in her community. On the other hand, Filo, who is Brazilian, remembers both her mother and grandmother talking freely about it.

A strong thread throughout the book is that of women pondering many questions about the perimenopause and menopause. There remain so many unknowns and uncertainties. What exactly does it mean to be perimenopausal? How does this time of life differ from the menopause proper, if indeed it does? What happens when the menopause is over? how do you know if it’s completely over? Do the various feelings and states of mind and body originate from hormonal changes, or are they also to do with the more general process of ageing and other factors that occur in the middle years? Is Hormone Replacement Therapy (HRT) a viable and safe option? These are just some of the queries that can flummox and perplex women.

As well as contending with the menopause, other reproductive health issues are discussed, including the agonising and, in some cases, impossible cervical smear test. The almost unheard-of condition of Lichen sclerosus. Gynaecological conditions and procedures that, though unbearable, are treated as routine, no-fuss processes. Women are supposed to just ‘get on with it’ – not an unfamiliar expectation for women in many aspects of their lives.

In all, these women show us that the menopause is a multi-faceted physiological and psychological terrain that can be tricky and painful to navigate. For some women their menopause is nothing but a nightmare, for others it goes barely noticed, and for the majority it is somewhere between the two.

The testimonies include humour, absurdity, sadness, rage, grittiness and suffering. It is a collection that describes what it is to be human in the face of the menopause. Working closely with these women was enlightening, moving, at times funny and at times sad, painful and always humbling. There will be millions of other stories out there, but here we make a start.

Caroline Vollans is a freelance educational writer. Prior publications include ‘Wise Words: How Susan Isaacs changed parenting’ an edited collection of a body of unknown work by this eminent psychoanalyst and educationalist.

Nursing The Troubles by Megan Kelly 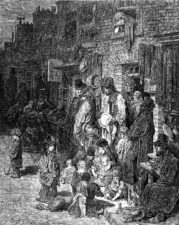 This site uses Akismet to reduce spam. Learn how your comment data is processed.

Play reading this Thursday – “My Little Sister” by Elizabeth Robins (1913)

Nursing The Troubles by Megan Kelly