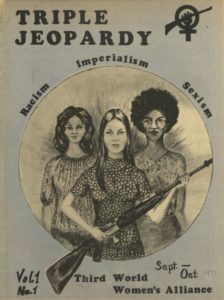 When I decided to submit a talk proposal for WHN’s 2021 Studying Herstories student conference, I had just finished an essay on women’s opposition to the Vietnam War, and had discovered some fascinating histories. The title of this blog, and the talk it’s based on, comes from co-founder of Black Women for Wages for Housework (now Women of Colour in the Global Women’s Strike), Wilmette Brown. Brown was deeply influenced by welfare rights activists and wrote about Black women’s connection to anti-war activism in Black Women and the Peace Movement (1984).

Although scholarship on ‘second wave’ feminism and the anti-war movement is increasing, there is scant scholarship exploring the work of women of colour in anti-war activity. The histories of the National Welfare Rights Organization (NWRO) and the Third World Women’s Alliance (TWWA) show how women of colour were key players in the anti-Vietnam War movement of the 1960s and 1970s, as well as demonstrating the influence of an anti-war stance on the development of intersectional analysis in Black feminist groups.

After 1968, there was growing participation of working-class people in the anti-Vietnam War movement, and issues of the war, race and gender became much more connected to class issues in the activist imagination.[1] The movement for welfare rights gained traction in the mid-1960s, driven largely by Black mothers, with a central focus on the problems which poor women faced. The NWRO was founded in 1967 in Washington D.C., drawing together dozens of local welfare activist groups.[2]

There were two main elements to welfare activists’ opposition to the Vietnam War. First, they critiqued the use of the U.S. budget for violence against children abroad rather than providing for families domestically. Second, they decried the killing of their own children through enrolment in the army.[3] In the Milwaukee County Welfare Rights Organization’s 1972 publication Welfare Mothers Speak Out, there is an explicit anti-capitalist message which urges the government ‘to stop subsidizing the rich, the corporations, and the military, and start assuring an adequate income for all Americans – through wages, welfare, or both.’[4] Mrs Cassie B. Downer further states that ‘poor people are the backbone of this country. We fight the wars, we do all the menial work, but the country can’t even start thinking about paying a just wage.’[5]

NWRO messaging frequently invoked the image of the mother, and the impact of poverty and the participation of male relatives in the military on women forms the core of its interaction with gender. However, they did not invoke motherhood as a natural identity for women. They drew on their material reality as Black, poor mothers to examine the economic and social ways in which the government’s war impacted on them, by requiring them to produce labour and fighting power for the country through raising children but refusing to reimburse them accordingly.

While welfare activists focused largely on the impact of the war on the women as U.S. residents, throughout the 1960s and 1970s women of colour were organising against the war on a more internationalist platform. In 1969, the Student Non-Violent Coordinating Committee’s Black women’s caucus, under Frances Beal, broke away. By 1971 the group had become the Third World Women’s Alliance (TWWA), to reflect its expanded membership consisting of Black, Puerto Rican, Chicana, Asian and Indigenous women.[6]

TWWA’s publication Triple Jeopardy includes many articles on the Vietnam War which are consistent in their analysis of race, gender and class – the three elements of oppression which ‘triple jeopardy’ referred to – as well as imperialism.[7] Beal has described the evolution of ‘double jeopardy’ (encompassing race and gender oppression) to ‘triple jeopardy’ as occurring within the context of the ‘enormous challenges to the status quo’ which occurred during this time.[8] One 1971 article linked the cost of American wars with the exploitation of poor people of colour domestically, drawing on the work of the NWRO. It described the conflict in Vietnam, and others in Asia, Africa and Latin America, as draining the American economy and leading the U.S. to look inward for exploitable labour.[9]

Another piece laments that ‘Black, Latino and Asian youth’ were being taken to fight in Vietnam while ‘our mothers and sisters struggle to eke out a decent living.’[10] TWWA thus combined an internationalist outlook with an analysis of the impact which the draft disproportionately had on minoritised families, and particularly the women left behind.

They were not necessarily against all war, however. Their imagery alone shows that they were in support of oppressed peoples rising up against their oppressors, and they supported and took inspiration from Vietnamese women guerrilla fighters. The women’s designation of themselves as ‘third world’, shows a lack of deference to their status as U.S. residents and citizens. For TWWA, not only were race, gender and class oppressions inextricably bound, but they were tied to the same systems of power which perpetuated imperialist and oppressive activities internationally.

Both the NWRO and TWWA made key contributions to the broader anti-war movement through their intersectional approaches. As such, they demonstrate Brown’s assertion that through focusing their struggles on issues facing Black women (and women of colour), such groups have led the way for an expansive anti-war activism.

Frankie Chappell is a PhD student at UCL’s Institute of the Americas, funded by the Wolfson Foundation. Her doctoral research focuses on the history of the group International Black Women for Wages for Housework and builds on her MA dissertation, ‘“Refusing Nuclear Housework”: The Radical Ecology of Black Women for Wages for Housework, 1976-2000’. She has previously worked in archives and in higher education. 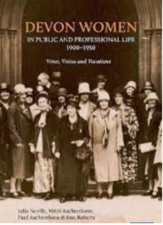 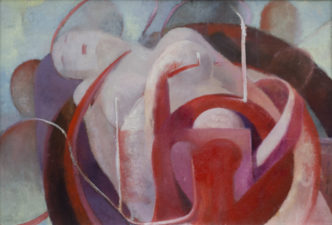