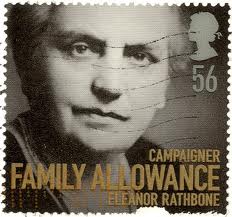 Who today, apart from a collection of historians with diverse interests from gender studies, welfare reform to refugee studies, remembers Eleanor Florence Rathbone, an exceptional woman who was born during Queen Victoria’s reign, in 1872, and died in 1946, whilst King George VI was monarch?

Her achievements were far greater than the sum of their parts, for she spent her working life confronting ‘unsuspected obligations’, championing the cause of the underrepresented in society, challenging officialdom, and generally fighting for the benefit of others, often at great personal cost. Yet she remains in the shadows of the great and the good, and whilst Eleanor herself never sought recognition for her work, we feel a responsibility to ensure that she is remembered, and that her public and personal achievements and their enduring impact, are fully recognised.

To set matters right, a colleague, Lesley Urbach, and I decided some months ago, to arrange a series of commemorative events for 2016, to coincide with the seventieth anniversary of Eleanor’s death. As luck would have it this coincides with the seventieth anniversary of the first payment of child benefit in August 1946, an allowance which Eleanor fought so hard for over decades, but which comes under regular threat.

This is, as we see it, the ideal opportunity to celebrate the achievements of a great humanitarian activist who had such an impact on the lives of so many people, but eschewed public acclaim, preferring, as Susan Pedersen has written in her magisterial biography of Eleanor, ‘to do good by stealth.’

So, where do you start on such an enterprise, especially when it is such a steep learning curve? The logical place is Somerville College, Oxford, which undoubtedly had a huge effect on Eleanor’s future. That she actually attended the college was nothing short of miracle. With years of private tuition behind her but only one year of formal schooling to her name, the young woman persuaded her parents to secure the services of the classical scholar, Janet Case, to tutor her privately in Greek. Case then urged Eleanor to attend Henry Jackson and Archer Hind’s philosophy lectures at Cambridge University, a notion which her mother, Emily, was vehemently opposed to. So, whilst Eleanor harboured a desire to go to Newnham College, Cambridge, her parents, especially her mother, were unyielding. Eleanor made herself ill over the debacle and the relationship between mother and daughter became strained almost to the limit. Almost a year of indecision was concluded when Eleanor’s father, William, intervened, and it was agreed that Eleanor could attend Somerville, Oxford. This was not a college but a halls of residence which was overseen by a dragon of a warden, who supervised every visitor, especially if they were male, and even if they were a relative. But the best laid plans for protecting Eleanor went awry for the year after her arrival in 1893 Somerville became the first (Oxford) women’s hall to adopt the name of college, on the grounds that it would ‘not only improve the educational status of Somerville in the eyes of the public, but would be understood as implying the desire of Governing Body to raise it above the level of a hall of residence.’  [1]

Eleanor was amongst a select band of pioneering young women who immersed  themselves in the academic atmosphere of Oxford, and who enjoyed the intellectual milieu of her fellow female students. She made enduring friendships and built up what we would now refer to as a network of contacts who remained important throughout her life. The atmosphere at Somerville energized and emancipated Eleanor, including her involvement with the Associated Prigs, known affectionately as the AP’s, the debating group which provided her with the perfect opportunity to hone her oratorical skills.  What neither she nor her fellow students could do was to matriculate ie become a member of the University, or graduate, both of which were only permitted after October 1920. By then, Eleanor was deeply immersed in her lifetime career as a humanitarian activist. Somerville College are rightly very proud of all their former students  but Eleanor holds a special place as she was the first of their students to become a Member of Parliament.  Plans are being laid for a symposium at Somerville in mid January 2016, and we are very excited at the prospect of having Professor Susan Pedersen of Columbia University, USA, author of Eleanor Rathbone and the Politics of Conscience, deliver the keynote speech. We are indebted to Dr Alice Prochaska, the Principal of Somerville, for expressing such an interest in these commemorations and for the co-operation she and the various offices at the college are offering.

Other plans taking shape include an event in March with Eleanor the focus of an International Women’s Day celebration – venue to be disclosed, but we are aiming for something high profile. Liverpool Central Library are one of numerous venues who have agreed to put on a public exhibition, and we are working hard at involving schools and universities in projects related to the wide scope of Eleanor’s work. This is of prime importance, for even though Lesley and I are especially interested in Eleanor’s work for refugees from Nazi Europe, this is one in the continuum of causes that she, as a responsible citizen, championed, and which resonates today. 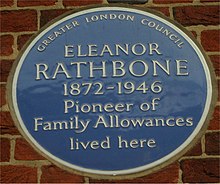 One of our biggest challenges is to secure funding for a permanent memorial to Eleanor. There was a plaque dedicated to her refugee work installed at Hoop Lane cemetery in North London in October 2013, and there are various buildings which bear her name, including the Eleanor Rathbone School in Israel, opened in 1949, as well as two blue plaques, one in London, the other in Liverpool. But what would be wonderful would be to have a statue of Eleanor standing proudly in one of the two remaining niches in St George’s Hall, Liverpool. In theory this is perfectly possible, and would be welcome, but in practice it would require around £100,000 to commission and execute. That was the cost of the statue of Kitty Wilkinson, the first Liverpool woman to be so memorialised, in 2012. If there is anyone out there who has ideas of how the money might be raised, or would like to lead a fund raising campaign, we would LOVE to  hear from you …

Susan Cohen is an Honorary Fellow of the Parkes Institute for Jewish/non-Jewish Studies at the University of Southampton. She works as an independent researcher, having been awarded her doctorate by Southampton in 2005 for her thesis on Eleanor Rathbone and her work on refugees. Her monograph, Rescue the Perishing: Eleanor Rathbone and the Refugees, was published by Vallentine Mitchell in 2010. Susan Cohen is currently researching the role of women in refugee organisations in Britain before and during the second world war.