Amy Galvin’s  post first appeared in March. However, with the House of Lords seminar to be advertised in the next post it seems relevant to remind readers of women’s past in the UK Houses of Parliament. The women about whom Amy Galvin writes were indeed ‘out of site, out of mind’. Not so the women who will be speaking at the seminar and overwhelmingly forming the audience, on June 14th, 2017. Thank you again, Amy, for  this contribution that demonstrates the importance of women’s presence, not only as participants in the parliamentary process but as audiences, seminar participants and speakers. WHN Admin.

Out of site, out of mind – the women of the ventilator

The beginning of the nineteenth century saw a return in popular thinking to ideals of womanhood centred on the ‘angel of the hearth’; women were the homemakers and keepers, with ideals of femininity focused around serenity, compassion and subservience. Although practically it was impossible to banish women entirely from the public sphere, this popular cultural thinking separated the world into public and private, with the public domain being the realm of men and the private domestic setting of the home being the realm, and some would say prison, of women. As a consequence, there emerged an ideology that saw women banished from public life and their influence over it was significantly reduced. Implicit within this ideology were attitudes to women in Parliament. Already in 1778, women had been banned from the House of Commons after a particular incident where the Speaker had called for the gallery to be cleared, but the female occupiers had refused. It is important to note that this ban occurred at a time of international tension, when many MPs had called for the galleries to be closed to the public to protect the county’s interests, and so cannot be said to be entirely motivated by gender. However, after the events of February 1778, men were able to return to the galleries, but women were not admitted, and this was still the case at the beginning of the nineteenth century as the thinking that women ought not to be involved in political life emerged with greater strength in light of new cultural ideas about the separation of public and private life.

Nevertheless, there were still some women determined to gain access to the Houses of Parliament. Although it is not clear when exactly the tradition began, there are numerous accounts of female visitors to the House of Commons in a place known as the ventilator. Before the fire of 1834, the old House of Commons chamber was situated in St Stephen’s Chapel. As a result of the high ceilings of the old chapel, MPs began to raise concerns about the acoustics and problems with hearing the debates in such a vast space. Consequently, an artificial ceiling was built into the chamber to solve the issue, and this left an attic space above the chamber of the house. In this middle of this new ceiling was hung a chandelier, and above, rising into the attic space, was a ventilator, designed to carry away the heat and residue of the candles. 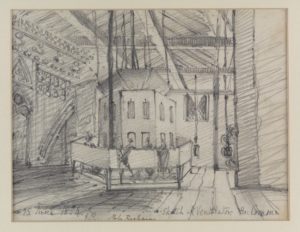 Here the ventilator is depicted in sketch form by Frances Rickman, daughter of John Rickman who was a Clerk Assistant to the House of Commons. Her sketch dates from June 1834, just four months before the House of Commons burned down in the fire of October that same year. In it, you can clearly see the tops of the arched windows of the old chapel and the column of the ventilator in the middle of the room. The figures crowded around the ventilation shaft are our female spectators; keen to observe the proceedings of the house but denied entrance to the public galleries, women gathered around the ventilator in the attic and peered through the gaps to see and hear as much of proceedings below as their limited view permitted. This was a unique site within Parliament; it is not clear when it began to be used as a place of observation, nor whether or not there were any official rules as to when the ventilator could be used and by who. However, as long as they were out of sight, the ladies of the ventilator were permitted to remain in their new site. Furthermore, as an unofficial space within Parliament, it was often overlooked when the public galleries were cleared, and so female spectators could sometimes achieve a privileged viewpoint that their male counterparts in the galleries below could not.

Visitors to the ventilator were varied and came from a range of backgrounds with various motivations for wanting to listen to debates in the House of Commons: some were relatives and friends supporting MPs below; others were visitors to London wanting to hear the novelty of a debate; others were the servants and companions of more aristocratic visitors. Writer Maria Edgeworth describes her own experience of the ventilator in lovely detail:

‘In the middle of the garret is what seemed like a sentry-box of deal boards and old chairs placed round it: on these we got and stood and peeped over the top of the boards. Saw a large chandelier with lights blazing, immediately below: a grating of iron across veiled the light so we could look down beyond it: we saw half the table with the mace lying on it and papers, and by peeping hard two figures of clerks at the further end, but no eye could see the Speaker or his chair, – only his feet; his voice and terrible “ORDER” was soon heard.[1]’

Maria Edgeworth’s use of the verb ‘peeped’ and her description of the limited view the ventilator afforded conforms to conventional notions of women marginalised and excluded from political life. The ‘deal boards and old chairs’ reflect the attitudes to their presence, and contrast starkly to the dark wood and leather upholstery that would have been provided for their male counterparts in the main chamber below. However, despite their apparent exclusion from a space created by and for men, the presence of women in the space of the ventilator refutes the cultural and ideological claim that women were totally excluded from public and political life in the early nineteenth century. The ventilator was a subversive space that created scope for women to re-enter political life. At this early stage in the nineteenth century the women’s suffrage movement was not in existence, and visitors to the ventilator were so wide ranging in both class and motivations that it is impossible to classify the ventilator as a site of political protest. However, what it did provide was a site of political education that, whilst marginalised, provided women with a unique access to political debates and initiated the re-entry of women to the space of Parliament. Unfortunately the ventilator perished in the fire of 1834, but the Ladies’ Gallery designed by Charles Barry in the new House of Commons provided a new political site for women to inhabit.

Amy Galvin is a current PhD student in the History department at the University of Warwick, funded by an ESRC doctoral award and working with the Parliamentary Archives. Her current research project considers female experience of political spaces in the nineteenth century and is interested in nineteenth century political culture and women, writing as a political tool and spatial theory. 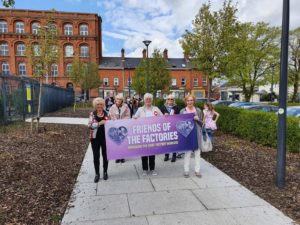