Who was Miss Hooper?

My parents met Gertrude Hooper when they were out walking in the Preseli Mountains, in 1970, and my father photographed her with her sheepdog in the snow that day.

Caught at that moment by the camera, she’s always appeared afraid of any contact. She makes an intriguing sight, wrapped up against the elements. You can’t see her face, but this isn’t the only source of mystery – there is also wonder about what she’s doing out there in the hills and how she can even survive, seemingly against the odds. A woman alone in the bitter cold, she seems almost to be a relic from the past.

Gertrude was around 66 years old when the photo was taken and she was living in the fireplace (they say) of the nearby farm – by all accounts the only part of the house that was robust at this stage as the rest had been neglected for decades by then and was dilapidated.

The Women’s History Network told me that many other farmhouses in the area had also fallen into disrepair and been abandoned as industrial changes took hold over the 20th century and took their toll on farming.

For hundreds of years, small scale sheep farmers and graziers have lived out in the Preseli Mountains surviving bitter conditions to make a scarce living and forming a part of the scattered rural communities of Pembrokeshire. Historians have told me that across England and Wales, many small farmers and graziers are women, but that they are often widows, which is not the case with Miss Hooper.

When Gertrude died in 1985 she was 80, and she was buried in Little Newcastle, not a mile from where she was born. By then she had lived for almost fifty years on her own in the hills where my parents had that encounter with her years before. She had lived through a tumultuous time, with the century’s world wars and far-reaching socio economic shifts in the region. One small life, through which history can be told.

Melissa Rees Herman is an independent filmmaker, making a film based on the life of Pembrokeshire sheep farmer Miss Gertrude Hooper. The film is Melissa Rees Herman’s attempt to put together some of the pieces of the elusive Miss Hooper, who lived an extraordinary life. 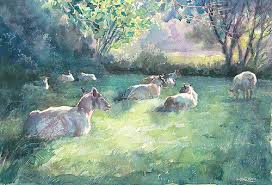 Please get in touch with Melissa Herman if you have any information about Gertrude Agnes Hooper (1905-1985). She is also interested in Pembrokeshire life during the first half of the 20th Century, particularly women and farming, women on their own, education, culture and the Eisteddfod, and especially first hand accounts.